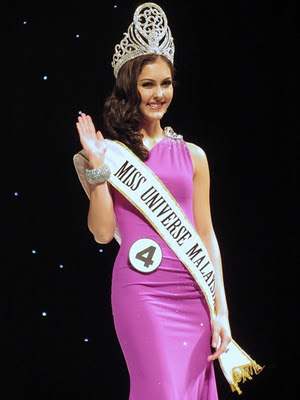 PETALING JAYA: Penang-born Kimberley Ann Estrop-Leggett took home the title Miss Universe Malaysia last night.
The 18-year-old beauty beat eight other hopefuls at the gala finale held in Sunway Pyramid Convention Centre here.
“I don't think you can define what a Malaysian looks like. I think I represent the 1Malaysia concept,” said Leggett, who is of British-Dutch descent.
Leggett, who has deferred her studies to participate in the competition, hopes to pursue her education in business and economics.

She was one of the 19 contestants that were selected from over a thousand participants in auditions held across the country.
The finalists appeared on a six-episode reality show BeautyCamp that was held from September.
The top nine finalists were determined by popular vote based on the reality show, which accounted for 20% of the final results.
Leggett beat an early favourite Aileen Gabriella Robinson, 22, who garnered more than half the total votes from Malaysian audiences.
She is expected to compete in the Miss Universe pageant next year.
The judges for the finale included ex-beauty queen Datin Josephine Fonseka, fashion designer Amir Luqman, model management icon Andrew Tan, fashion guru Gillian Hung, and fashion designers Stephanie Kay and Bill Keith.