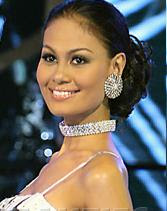 Biography
Maria Venus Bayonito Raj (born 1989) is the one of the three reigning Binibining Pilipinas winners, and she will be representing the Philippines in the 59th Miss Universe pageant. She was crowned on March 06, 2010 during the Grand Coronation Night of Binibining Pilipinas 2010 held at the Araneta Coliseum. She has Indian lineage.
Two years ago, Raj competed in the Miss Philippines-Earth, and was named as Miss Philippines Earth Eco Tourism 2008. She was crowned on May 11, 2008 at Crowne Plaza Galleria, Manila, by the previous year's winner, Anna Katrina Bautista.
Raj finished her bachelor's degree in Communications Arts, major in Journalism, at Bicol University in Albay, with Latin honors. She is currently working as an Information Assistant for the Department of Environment and Natural Resources in Region IV. In addition, she works as a fashion model in Manila.